Day Two of Cancon was going to kick of in style!

Matchups had been posted the night before, and I was squaring up to none other than Pat Nevan from Measured Gaming and Bush Radio fame. I was stoked. I love playing against people I've never played before, and the Measured boys are a blast. However...

In their most recent podcast, the prep show for CanCon, Pat himself had made it abundantly clear that one of his pet hates was when someone doesn't show up to the table with a printed off list. And guess what I'd given away the day before...

But all my worry was for naught, as he'd already checked out my list, as had I his, and he was pretty familiar with Ironjawz as well, so we were off to a cracking start.

Here's what I was up against. 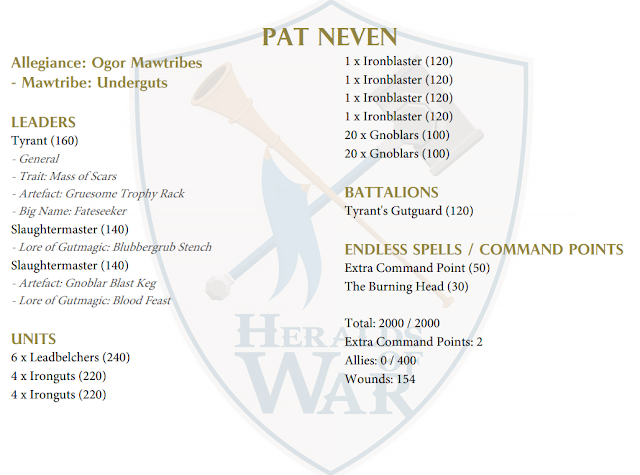 Now. If I was going to do an Ogor army, this was pretty much going to be it. I rate Undergut, and I was interested to see what they could do! I was very concerned about the sheer volume of D6 damage cannonballs that were going to be flying about. D6 is always a gamble, and in a pinch you should always treat it as a 1 because that's what you're always gonna roll when you need it most, but at the same time, it takes one hot round of dice and you've punched barrel-sized holes in something important!

The scenario was Three Places of Arcane Power, so we had a diagonal deployment, and with no back field objectives and no crazy movement/teleport shenanigans coming my way, I deployed with the intent of ramming my whole army up the board at pace, into (and hopefully through) the teeth of the Ogor guns. 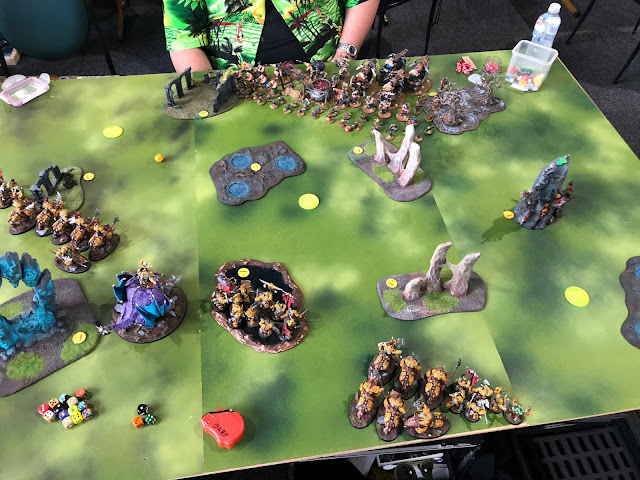 I deployed a little off the line with my Maw-Krusha as I knew he was public enemy #1 in this game, while my Shaman and 10 Ard Boys parked up in some very convenient Overgrown terrain. Pigs on each flank were a little less concerned about losing a body or two early, but I made sure the Chanters were safe and sound out of any potential range.

Having outdropped Pat, I gave him first turn. This not only chewed up one of his shooting phases, offering him no real targets in range, but also set me up for a potential double turn... 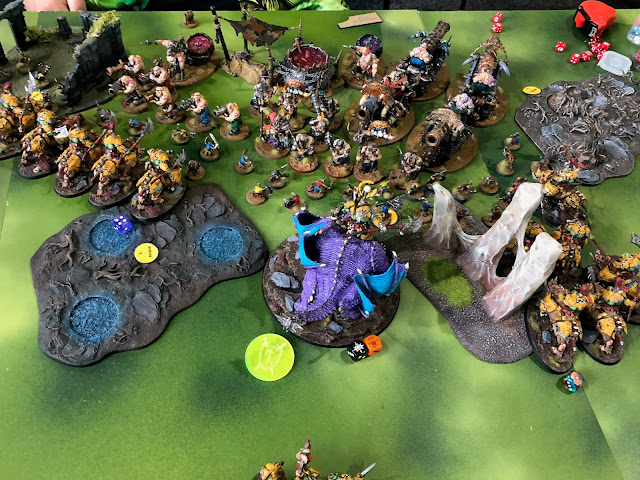 My turn one was far from subtle! I rocketed across the board, buffing and Mighty Destroyer-ing both units of Pigs and the Maw-Krusha to some pretty stupid levels. All three slammed into the double layered screen of Gnoblars, and handed out some pretty generous serves of mortal wounds. The Realm of Life command ability meant that I took a handful of mortals in return, but that was a small price to pay to close the gap with the cannon battery. The right unit of pigs took one for the team and poured their attacks into the surviving Gnoblars, which cleared the way for the Krusha and the left hand unit of Pigs to pile into some more juicy targets.

The left unit of pigs managed to drag the Leadbelchers into combat, which was a big deal, as it prevented them from unleashing their guns on the Krusha, while my cabbage dragon ripped into one of the units of Ironguts. These guys had be concerned, as they have well and truly enough killing power to wipe out a Krusha, but as a trend we would see continue throughout the game, Pats dice betrayed him at every turn. While I only killed a couple of them, they swung back hard, hitting with almost everything. But the wound rolls and some truly stupid armour saves meant that my Krusha Boss took minimal damage. 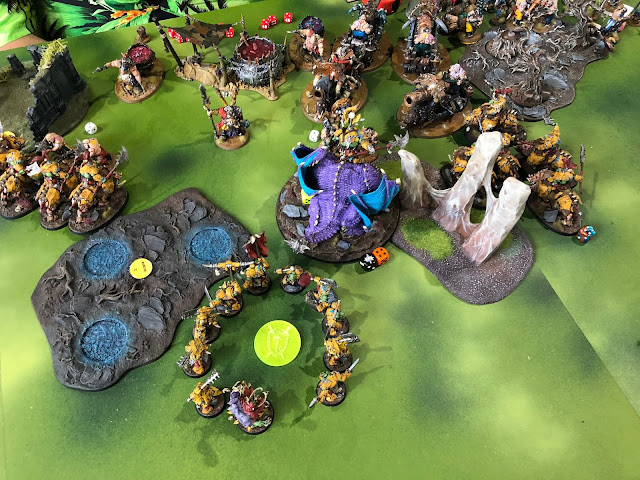 The double turn was not kind, as I was already deep into Pats army when I won the turn two priority roll. I was not cautious about spending more command points to pile in and attack with the Krusha, piling into the second unit of Ironguts and unleashing absolute fury upon them. The pigs on the left got a free MD pile in from my Ironfist Battalion and continued to batter the Leadbelchers, while the rest of my army moved up to lock down all the objectives. 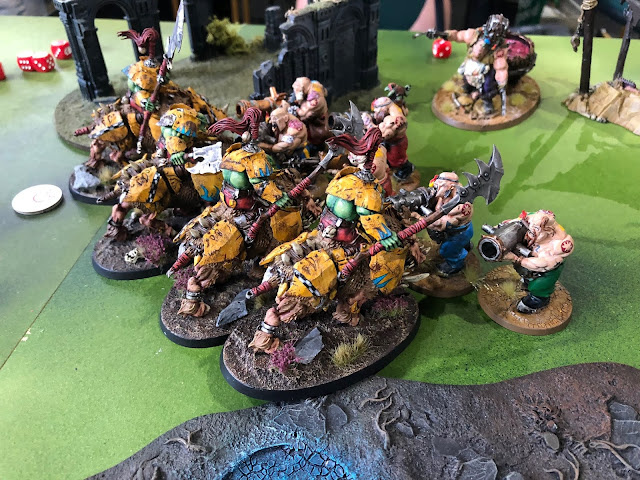 I'd managed to box most of the Ogors into their deployment zone, but the fat boys weren't going down without a fight. In turn two, the Belchers fired point blank into the pigs and chipped off a couple of bodies. The Ironblasters, finally presented with a target worthy of a glorious death, lined up the Maw Krusha and pulled the trigger. Four cannon balls wounded. After my punch on with the Ironguts, I was left on seven wounds, so my boss was staring down the barrel of a killing blow. Somehow, he managed to scrape two saves, leaving 2D6 damage to be slapped on him.

On average, it should have been seven wounds.

It was two ones.

My Megaboss was left standing, battered and bruised on five wounds, having survived both units of Ironguts and a volley of cannonballs to the chest.

The Tyrant, firm in the idea that if you want something done right, you've got to do it yourself, rumbled in and caved the Maw-Krusha's head in without a moments hesitation! 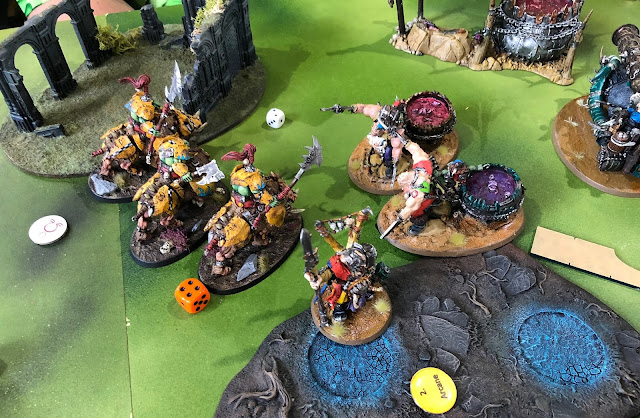 Getting the double turn back on me, and having only his heroes and Ironblasters still alive, Pat went to work on crushing as many kill points as he could to get the secondaries. All three of his heroes started hacking into and chewing on my left-side Piggies, who were fresh off their fight with the Leadbelchers. I somehow managed to kill one of the Slaughtermasters, and survive with a single Gore-Grunta who decided it was probably a good time to make himself scarce.

The other unit of Pigs had managed to pile in and kill as many cannons as they could.

The game from this point was a swirling brawl around the Tyrant. I sent my Ard Boys in, with Violent Fury, and they made a mess of the Tyrant and the other Slaughtermaster. At the end of turn four we called the game. I'd had four full turns of holding all three objectives, and the bloody battle in Pat's deployment zone eventually went the way of the Orruks.

This ended up being a pretty brutal game after the initial double turn proved so pivotal. Being able to clear the screens and get into the juicy elements of the army was a big deal, and the double turn just didn't allow for the Ogors to counter-attack, which I think would have been bloody. A fresh unit of Ironguts, and a full round of shooting with all the cannons still operational and out of combat would have been punishing.

There were some moments where it looked like swinging back, but Pat's dice truly left him in this game. Ever Pat was an absolute gentleman to play, and I'd happily throw dice with him again. We had a good chat about Ogors afterward, as well as some chilled beverages in the carpark with the rest of the crew. I was stoked I got to play at least one of the Bendigo boys, and stoked to be sitting on 3-1 after four games.

Check in soon for Game 5 against the other boogeyman army at the tournament, Ossiarch Bonereapers. More specifically, Petrifex Elite with Nagash!

Cheers for reading
Gabe
Posted by The Rune Axe Wargaming at 19:16